·      Studied at LSU and Pepperdine University

·      International outreach, helped open a Academy for youth in Dominica Republic, worked personally with the president of Dominica in 2012

Coach Nick is not only a great athlete, but has great experienced working and ministering with kids.
Coach Nick has shared his training with athletes of all levels and has helped kids get to the next level. With either individual private training or with a whole team your children are being mentored and guided to be the best on and off the court. Coach nick makes sure of that.

Born in San Jose, California,
-  Played 4 year at UIC, University of IL at Chicago
- a bachelor of arts in liberal arts and science, with the focus on African American studies and communications.
- over 7 years of experience as a professional basketball player overseas and in the WNBA.
- co-owner a 501(c)3 ministry called  TPA HOOPS (Today Pro Athletes Helping Others Obtain Personal Salvation)
- Published author: The Slave Mind and The Mind of God
- Chaplain Minister Help4Kidz International
- Board Member and mentor of National Latina Latino Commission.
6’1 (3-4 Forward/Small Forward; Great Defender and Rebounder)
Phoenix Mercury WNBA 2008
Sporting of Athens, Greece 2005 to 2007
Wels Power Basket, Austria 2004 to 2005, MVP and Austrian Champion, Chicago Blaze NWBL 2003 to 2004
University of Illinois-Chicago 2003
Amador High School 1996 to 1999 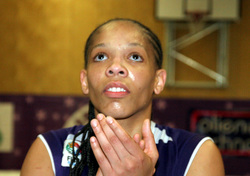 Coach Jaysie is determined to change the lives of children and their own aspects of life.
Her excitement to the future of our children has made many realize how important her role is in this program and to others.
Coach Jaysie also works on the Academic half of the program in which she tutors our students and help prepare for college with working on ACT and SAT testing.
Coach Jaysie is determine to educate our kids and give them a sense of responsibility in their lives